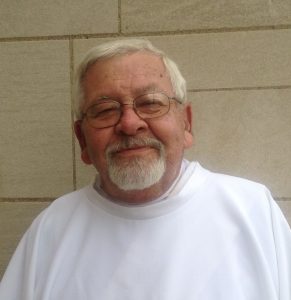 From the desk of Deacon Mike McCormick…

The term  Advent actually means coming.  It is a period of four weeks that we should increase our prayers and set aside time for reflection on the true meaning of our faith.

In the early day of our Church, it was suggested that we fast much like we do during Lent.

Advent is a special time for our Church and the Liturgy, for the next year, the readings at Mass will be from cycle A.  For the next four weeks the color of choice in the Church will be purple.  The decorations are purple, the cloth on the Altar is purple, and vestments that are worn at Mass are purple.  Placed near the Altar is the Advent Wreath and that has special significance also.

The wreath crown is traditionally made of fir branches knotted with purple ribbon and decorated with pine cones, holly, laurel and sometimes mistletoe.  It is also an ancient symbol signifying several things.  First of all, the crown symbolizes victory and reminds us of the crown of thorns that Jesus wore for us.  In addition, its round form evokes no beginning, and no end.  The number four, as in the candles, represents the four weeks of Advent, the four seasons and the four Cardinal Virtues of Prudence, Justice, Fortitude, and Temperance.

The color green is a sign of life and hope.  The fir tree is a symbol of strength and the laurel is a symbol of victory over sin and suffering.  They don’t lose their leaves and this represents the eternity of God.

The flames of the candles are the representation of the Christmas Light, bringing hope and peace as well as the symbol against darkness.

There are three purple candles and one pink candle on the wreath.  They symbolize the four stages of human history – Creation, The Incarnation, The Redemption of Sin, and the Last Judgement.  The pink candle is lit on the Third Sunday of Advent called Gaudete Sunday, meaning “rejoice.”  By this time we should be excited about the soon to be birth of our Savior.

If we don’t think that we have time to pray and serve others, maybe now would be a good time to read the poem that I used in my last homily.

No Time to Pray

I knelt to pray but not for long,

I had too much to do.

I had to hurry and get to work

For bills would soon be due.

So I knelt and said a hurried prayer,

And jumped up off my knees.

My Christian duty was now done

My soul could rest at ease.

All day long I had no time

To spread a word of cheer.

No time to speak of Christ to friends.

They’d laugh at me I’d fear.

That was my constant cry,

No time to give to souls in need

But at last the time, the time to die.

I went before the Lord,

I came, I stood with downcast eyes.

For in his hands God held a book;

It was the book of life.

God looked into his book and said
“Your name I cannot find.

I once was going to write it down…

But never found the time.”