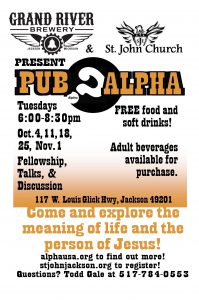 Our fourth run of Alpha will debut a brand new Alpha Video Series (which is dynamic!) at a brand new location: The Grand River Brewery just a few blocks from St. John Church. We will run Alpha on Tuesday evenings 6:00-8:30 beginning October 4. I’ve heard complaints from folks who think Alpha is too light, too “Protestant”, or too secular. Fr. John Riccardo, one of the most popular personalities on Catholic Radio and well known priest of the Archdiocese of Detroit says: “I’ve heard a few people express concerns about the non-Catholic origin of Alpha. It’s true. It was founded by an Anglican pastor, Nicky Gumbel… Though it’s origin might not be Catholic, it has been spoken highly about by people ranging from Father Raniero Cantalamessa, who is the Pope’s preacher in the Vatican; Archbishop Arenas, the Secretary for the Pontifical Council for Promoting the New Evangelization; Cardinal Christoph Schonborn, the man responsible for editing The Catechism of the Catholic Church…”

Fr. Cantalamessa says, “We need a new evangelization which, while being open to all the fullness of the truth and the Christian life, will yet be simple and basic. …It is not called ‘Alpha and Omega course’ but simply ‘Alpha Course’ because it doesn’t claim to lead people from beginning to end in faith; only to help them get acquainted with it, to foster a personal encounter with Jesus, leaving it to other Church departments to develop the newly kindled faith.’”

Come and see why Alpha has become a cornerstone to our Faith Formation ministries at St. John!