Greetings! I’m Joseph Gruber, missionary from FOCUS and missionary here at St. John the Evangelist Parish. I’d like to take a m 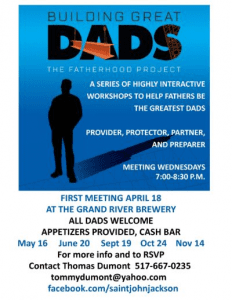 inute or two of your time to talk about fatherhood.

When my son Philip was born, my wife and I were busy reading all sorts of books about birth, babies, and taking care of children, as well as hearing advice from all sorts of people. Far from feeling like I had no direction as a dad, I felt like there were too many directions from too many people. That got me wondering: how do I really learn how to be a good father? I can’t follow every piece of advice, and I can’t imitate every example. What should I choose?

Have you ever wondered about learning to be a parent? Where did your father learn to be a father? Was it from his father? His uncles, cousins, neighbors? From books or from films? What example did he set for you?

Some people say that we’re facing a crisis of fatherhood—that fathers are choosing to be bad examples, or choosing not to be examples at all. One of the things that makes it so hard for us dads now is that we’re too often choosing alone. I’ve been praying for three basic things since coming to Jackson: to find men who can teach me to be a good father, to find men who will learn with me how to be a good father, and to be able to pass on whatever I learn to other men.

Wednesday, April 18th, at 7:00pm at the Grand River Brewery, I think my first two prayers may be answered. Dan Dolsen, founder of the Fatherhood Project, will host the first of 6 monthly workshops on Building Great Dads.

Maybe you are like me, or know men like me, who are new to this fatherhood job, and would love Christ-centered direction for how to father. Maybe you, or the men you know, have been fathers for a good long while, and could use a refresher. If you are a dad, I encourage you to come to check out the workshop. If you know a dad, please let him know that he doesn’t have to figure everything out on his own.

The six workshops will be covering four roles fathers have in their families (I didn’t even realize we had more than two!): being providers, protectors, partners, and preparers. The first workshop, this Wednesday, is an introduction. I’m excited to learn more!

Contact me at joseph@saintjohnjackson.org to RSVP, or Tom Dumont at tommydumont@yahoo.com!