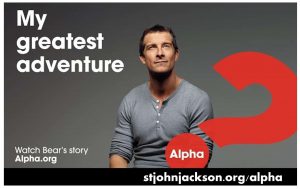 For Catholic disciples who already have a love for the Sacraments and the Word, Alpha is a terrific tool for those family members or friends who have lost their way or are pushing against what we believe. It is not preachy or churchy, but it is not watered-down or hokey either. The Alpha in the Catholic Context at St. John will be true to the magisterium and not “too Protestanty.” It is a basic introduction–not deep catechism study and not liturgy–but the time-honored Truth that leads to catechesis and the Sacraments. It is endorsed by Fr. Cantamelessa, the Pope’s preacher; Archbishop Rino Fisichella, the President of the Pontifical Council for Promoting the New Evangelization; Cardinal Christoph Schönborn, Archbishop of Vienna; Cardinal Seán O’Malley, Archbishop of Boston Fr. Robert Barron, Fr. John Riccardo, our own Bishop Boyea and many thousands of parish priests around the world!

Join us as we launch Alpha Tuesday, October 3, 6:00pm at the Grand River Brewery. Come and see! CLICK HERE to pre-register, so we can be sure to have enough food! 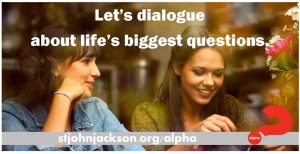