Did you know: To serve and protect

To serve and protect.  What do you think of when you see those words?  Most of us probably think of the side of police cars as they often seem to have the words, “To serve and protect” painted along their side panels somewhere.  Does it call to mind the Biblical story of Adam’s mission at all?  Probably not, but let’s see why it should.

In the book of Genesis, the first book in the Bible, God creates man and places him (he doesn’t have a name yet) in the garden of Eden.  There he is told to “till it and keep it,” (Gen 2:15, RSV).   It’s important to remember that we are reading a translation and this text was originally written in Hebrew.  Although we read it as “till and keep”, a better translation is “serve and protect”.  In fact, in other places in the Pentateuch – the first five books of the Bible – we can find these same words used together to describe priestly duties, and there it is translated in this way.  The priests of the ancient Israelites “serve” in liturgical worship and they “protect” the Tabernacle, which is the traveling tent of worship.

So what was Adam given as his mission from God in the garden?  To serve and protect Eden, in a priestly way.  How does a priest serve?  In worship.  We can still see these terms interchangeably today.  A church may post their times of: service, worship, Mass, or liturgy – and they mean essentially the same thing!  This is the time when we come together to worship God, to serve Him.  For Adam, tilling the garden, in other words producing good fruit from what he was given, is his service to God.  It’s his worship.

Also, he was called to protect the garden.  Protect it from what?  Well, he finds out in the very next chapter of Genesis when the serpent 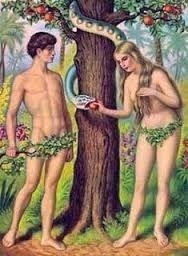 comes prowling around.  We often think of Eve as facing the serpent alone because she is the one that engages in dialogue with him – mistake number one: never argue with Satan, you will lose every time – but if we read carefully we can see that Adam is right there with her, “So she took some of its fruit and ate it; and she also gave some to her husband, who was with her, and he ate it,” (Gen 3:6b, NAB, emphasis mine).  He was supposed to protect the garden and his wife.  He failed at both tasks.  The snake (in Hebrew ‘nahash’ meaning: fiery serpent, dragon – this dude is scary) saunters into the garden without any resistance and lures Eve into a false sense of trustworthiness, all while Adam stands silently by.

To serve and protect.  These are his tasks.  And they are ours.  How well do I live out my calling to serve the Lord?  Do I worship Him in my daily life?  Do I produce good fruit from what He has given me to work with?  Am I protecting my soul from things that don’t belong there?  Guarding my eyes from things I can never un-see?  Protecting my mind from thoughts, sounds, and images that may lead me into sin?  And am I equally as protective of those I am responsible for?  Do I speak up for my spouse, children, and Godchildren against those same temptations?

It’s been a long time since Adam left the garden, but we still have the same call.  Next time you see a police car drive by, look for this phrase on its doors, “To serve and protect,” and remember how you, too, are called to the same mission!